It is recommended that the Board of Health:

In June 2018, the Federal government passed Bill C-45, the Cannabis Act, which legalizes, regulates and controls the production, distribution and sale of cannabis and allows adults to legally possess cannabis. The goals of the Cannabis Act include: keeping cannabis out of the hands of youth, keeping the profits out of the hands of criminals, and protecting public health and safety by allowing adults access to safe and legal cannabis.1 Cannabis became legal in Canada on October 17, 2018.

Currently in Ontario, the only legal option for purchasing non-medical cannabis is online through the Ontario Cannabis Store (OCS). By April 1, 2019, the province is expecting to launch a retail model for cannabis that will be regulated by the Alcohol and Gaming Commission of Ontario.2 The Federal government plans to authorize the sale of cannabis edible products at the federal, provincial and territorial levels within twelve months of the Cannabis Act being released. 2

These legal changes will likely have impacts on cannabis use patterns in Canada. Public health evidence from alcohol and tobacco shows that increased access to a substance tends to result in greater consumption and harms.3,4 To assess and monitor the impact that legalization has in Canada, it is important to collect information on the frequency of cannabis use and changes in behaviour over time. Other surveys, including the Canadian Tobacco, Alcohol, and Drugs Survey (CTADS); the National Cannabis Survey (NCS); and the Canadian Cannabis Online Survey (CCOS) collect information on cannabis use among Canadians, however the results are not available at the local level.5,6,7

To fill this information gap, Wellington-Dufferin-Guelph Public Health (WDGPH) administered a survey in June of 2018 to gather baseline information about people’s attitudes towards cannabis, their knowledge of its health effects, their interest in using cannabis once legal, their cannabis use behaviours, and the impacts of cannabis use on current users. This information will serve as a baseline to compare with surveys conducted in the future, to assess the impacts of the legalization on cannabis use patterns. Additionally, the information can be used by WDGPH and community partners to guide the development of educational resources and interventions to address the potential impacts of cannabis legalization.

An anonymous and voluntary online survey was administered to WDG residents ages 16 and older between June 7, 2018 and July 8, 2018. Respondents were recruited using online and print advertising, and the survey was promoted through local media. Targeted advertisements were used to increase the response rate among underrepresented communities.

A total of 4,073 survey responses were received, of which 2,776 were valid and complete. The sample included a high proportion of females, people who have completed a post-secondary education and people 20 to 39 years of age. Table 1 shows the demographics of respondents before and after weighting to match local census data.

Note: Table includes people who ‘strongly agree’ and ‘somewhat agree’.
Note: All differences between people who use cannabis and people who do not are statistically significant.

Respondents were also asked if they had heard of Canada’s Lower-Risk Cannabis Use Guidelines, developed by the Centre for Addictions and Mental Health (CAMH). The guidelines include ten (10) evidence-informed recommendations which suggest ways to use cannabis more safely. Most respondents (87.2%) indicated that they had not heard of these guidelines.

Participants were asked how much they agreed with a series of attitude-based questions about cannabis. Table 3 shows the percent that agree among people who use cannabis and people who do not use cannabis.

Note: Table includes people who ‘strongly agree’ and ‘somewhat agree’
Note: All differences between people who use cannabis and people who do not are statistically significant.

Most participants believed that cannabis use can be beneficial, that it would be easy for them to access cannabis, and that using cannabis is socially acceptable. These results highlight opportunities for WDGPH and partners to promote healthier attitudes toward recreational cannabis use. In contrast, few respondents agreed that they see advertisements for cannabis regularly (26.4%), or that cannabis use is a problem in their community (22.9%).

Attitudes differed between people who had used cannabis in the past year, and people who had not. Cannabis users were more likely to agree with positive statements about cannabis (e.g. “Using cannabis can be beneficial”) and less likely to agree with negative statements (e.g. “Cannabis use is a problem in my community”). Additionally, 15% of cannabis users indicated a willingness to share cannabis with an underage person, in contrast to less than 3% of cannabis non-users.

Three quarters of respondents (74.2%) reported that they had used non-medical cannabis in their lifetime. About one-half of these people had begun to use cannabis prior to or at age 16. Fewer than one in ten began using cannabis after age 25 – the age at which the teenage brain stops developing.8

Figure 1. Age of first use of cannabis among respondents who have ever used cannabis (weighted)

Figure 2. Frequency of cannabis use among respondents who used cannabis in the past 12 months (weighted) 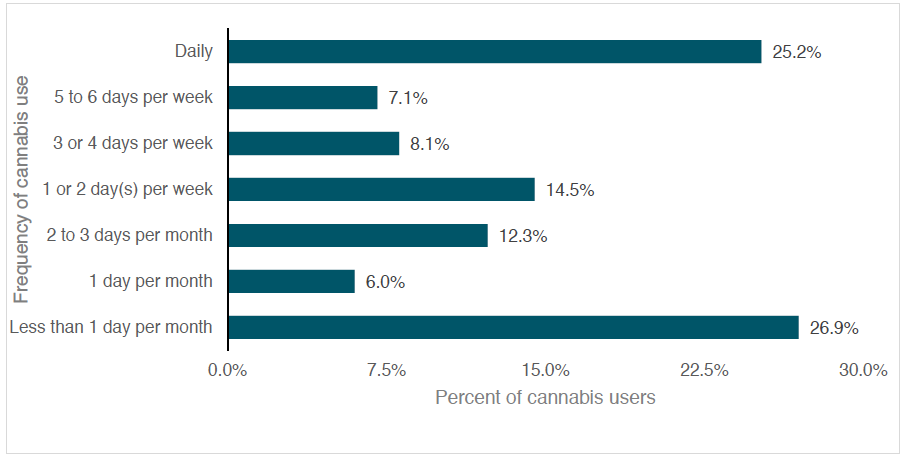 Figure 3. Daily cannabis use among people who used cannabis in the last 12 months, by age group (weighted)

Note: Total for each age group may not add up to 100 percent due to rounding.

Cannabis use and driving

Among respondents who reported using cannabis in the past year, almost one-quarter (24.3%) reported that they have driven a motor vehicle within two (2) hours of using cannabis.

Intention to use among people who do not use cannabis

Note: Total percent does not add up to 100% as respondents were able to select more than one response.

The WDG Cannabis Survey recruited 2,776 valid and complete responses, which were weighted to be more representative of the WDG population. Over one-third of respondents reported they had used non-medical cannabis in the past year. Based on other Canadian cannabis surveys this number is expected to be between 15 and 22 percent, suggesting this survey attracted a high number of people who use cannabis.

Knowledge about some aspects of cannabis use was poor, and knowledge was lower among cannabis users than non-users. Fewer than two-thirds of all respondents knew that:

These knowledge gaps are an opportunity to offer targeted and accurate information to the public to promote safer cannabis use. Survey results informed the focus and key messages of the recent ‘Talking About Weed’ awareness campaign. WDGPH will continue to use the survey results to shape programs and services to reduce cannabis-related harms.

Baseline data collected in this survey can be compared to data collected in future (post-legalization) surveys to assess the impacts of cannabis legalization. WDGPH will also share survey results with municipalities and health and social service providers to help inform community policies and programs relating to cannabis use.

Goal: Public health practice responds effectively to current and evolving conditions and contributes to the public’s health and well-being with programs and services that are informed by the population’s health status, including social determinants of health.

Goal: Public health practice results in decreased health inequities such that everyone has equal opportunities for optimal health and can attain their full health potential without disadvantage due to social position or other socially determined circumstances.

Substance Use and Injury Prevention

Goal: To reduce the burden of preventable injuries and substance use.

Health Equity: We will provide programs and services that integrate health equity principles to reduce or eliminate health differences between population groups.

Organizational Capacity: We will improve our capacity to effectively deliver public health programs and services.

Service Centred Approach: We are committed to providing excellent service to anyone interacting with WDG Public Health.

✓ Building Healthy Communities: We will work with communities to support the health and well-being of everyone.

There are several populations that are more vulnerable to cannabis-related harms. People aged 15 to 24 years of age are more likely to use cannabis and they are more likely to experience cannabis-related harms as their brains are still developing.9 Youth who begin using cannabis regularly at a young age are at an increased risk for developing an addiction, mental health issues and learning and memory problems.8,9 This could be of concern in WDG as the survey results show that age of first use of cannabis peaks at 16 years of age, and youth are using cannabis more frequently on a weekly basis (i.e. 1 to 6 days per week) compared to older age groups.

Additionally, using cannabis while pregnant can lead to lower birth weight and has been associated with long-term developmental impacts in children and adolescents (e.g. decrease in memory, ability to pay attention and reasoning and problem-solving skills).8 Lastly, people who have a personal or family history of mental health issues (especially psychosis or substance use disorder) have an increased risk of developing mental illnesses, like psychosis or schizophrenia.8

Portions of the recent ‘Talking About Weed’ awareness campaign address high-risk groups, including youth, people who are pregnant and people with personal or family history of mental illness. Moving forward, communicating survey results internally, with community partners and the public will allow for more targeted health promotion communication and improvements to programs and services for these high-risk groups. Lastly, continued monitoring of cannabis use patterns among these high-risk groups will assist with understanding how cannabis legalization will impact them. 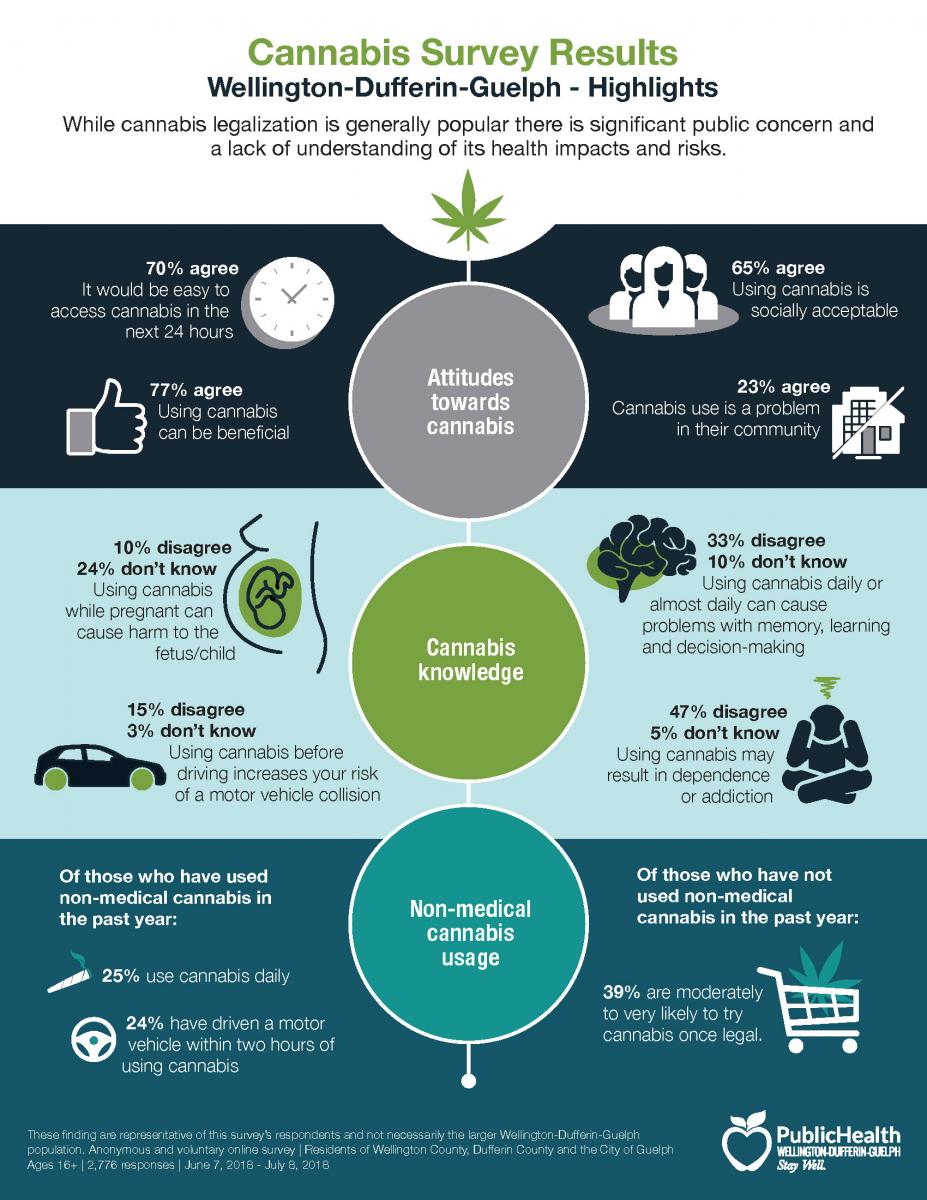 While cannabis legalization is generally popular there is significant public concern and a lack of understanding of its health impacts and risks.

Of those who have used non-medical cannabis in the past year:

Of those who have not used non-medical cannabis in the past year: