Home / Summary of Outbreaks in Wellington-Dufferin-Guelph in 2015

Summary of Outbreaks in Wellington-Dufferin-Guelph in 2015

(a) That the Board of Health receives this report for information

Wellington-Dufferin-Guelph Public Health (WDGPH) is responsible for the investigation and management of enteric and respiratory outbreaks in institutions.1 Institutions include retirement homes (RH), long-term care homes (LTCH), licensed daycares, group homes and hospitals. Institutional outbreak management often requires a significant amount of Public Health involvement. The degree of involvement depends on the type of outbreak, the type of facility and how well the facility is able to implement and comply with recommended infection control measures.

The Ministry of Health and Long-Term Care (MOHLTC) has created Best Practice documents to assist facilities in recognizing and managing both respiratory and enteric outbreaks.2,3 These documents outline the criteria needed to define a suspected or confirmed outbreak of illness and provide guidance around the control measures needed to minimize transmission within the facility and end the outbreak.

During 2015, WDGPH reported a total of 156 unique outbreaks to the MOHLTC via the integrated Public Health Information System (iPHIS). Of these 156 outbreaks; 14 ultimately did not meet the definition of a confirmed or suspect outbreak, 14 were created for the purpose of mandatory aggregate chickenpox reporting to the MOHLTC, one represented a Clostridium difficile infection (CDI) outbreak in an area hospital and two were true community outbreaks involving mumps and hepatitis A respectively. The remaining 125 reported outbreaks were confirmed or suspected enteric (n=63) or respiratory (n=62) outbreaks in institutional settings.

The timely identification of outbreaks and subsequent outbreak response by Public Health is important in controlling the spread of infectious disease within WDGPH. Outbreaks represent an opportunity for Public Health staff to work collaboratively with area institutions and to provide information and messaging on current infection prevention and control recommendations and best practices.

Public Health’s response to and involvement in the management of a suspected or confirmed facility outbreak typically involves the following actions:

*Including outbreak classifications of “confirmed”, “suspect” and “does not meet outbreak definition”

**Created as outbreaks for the purpose of MOHLTC monthly aggregate reporting

Sporadic cases of chickenpox are created as outbreaks in iPHIS for the purpose of monthly aggregate case reporting to the MOHLTC and  are excluded from the remainder of this report (n=14). In 2015 there was also one Clostridium difficile infection (CDI) hospital outbreak, one community mumps outbreak and one community hepatitis A outbreak. These three outbreaks and the 14 enteric and respiratory institutional outbreaks that did not meet case definition are excluded from further analyses. The number of confirmed or suspected outbreaks in institutions (n=125) are reported in Table 2.

All institutional respiratory and enteric outbreaks reported in 2015 with a classification of “confirmed” or “suspect” (n=125) are summarized by month in Figure 1. 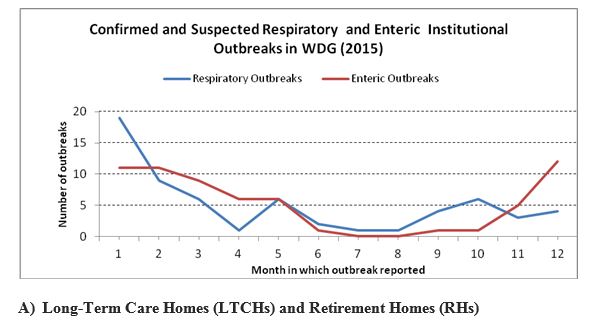 In 2015, WDGPH received reports of 56 confirmed or suspected respiratory outbreaks in area RHs and LTCH, a 37% increase over the previous year (2014) in which 41 respiratory outbreaks were reported. Many factors influence the number of outbreaks that occur each year, including whether or not the seasonal influenza vaccine is a good match to circulating disease strains and whether uptake of the vaccine among institutionalized clients, facility staff members and members of the public is sufficient in order to minimize the spread of disease. In 2015 the 2014/2015 seasonal influenza vaccine was not a good match to circulating strains of Influenza A(H3N2), the dominant circulating strain.4  Influenza A virus was isolated in 21 of the respiratory outbreaks reported to WDGPH in 2015, whereas influenza B was only isolated in a single outbreak. A total of 15 outbreaks were classified as respiratory infection unspecified or unknown either due to a lack of specimens being submitted to the PHOL during the outbreak or due to no organism being identified during testing. Table 3 summarizes respiratory institutional outbreaks by the identified organism (if applicable) reported from 2013- 2015.

Duration of Respiratory Outbreaks in RHs and LTCHs

Duration of Enteric Outbreaks in RHs and LTCHs

The duration of the enteric outbreaks ranged from four to 39 days with a median of 14 days and an average of 15 days.

WDGPH does not declare respiratory outbreaks in daycares unless an unusual reportable organism (e.g., pertussis) is confirmed to be the cause of an observed increase in respiratory illness within the centre.

Duration of Enteric Outbreaks in Daycares

The duration of enteric outbreaks reported to WDGPH by area daycares in 2015 ranged from nine to 47 days with a median of 14 days and an average of 17 days.

Duration of Respiratory Outbreaks in Hospitals

The duration of respiratory outbreaks reported to WDGPH by hospitals in 2015 ranged from seven to 42 days with a median of 11 days and an average of 16 days.

In 2015, there were three enteric outbreaks reported to WDGPH by area hospitals. This represented an increase from the previous two years in which no outbreaks (2014) and two outbreaks (2013) were reported. No organisms were identified in any of these outbreaks (Table 7).

Duration of Enteric Outbreaks in Hospitals

The duration of enteric outbreaks reported to WDGPH by area hospitals in 2015 ranged from eight to 14 days with a median of ten days and an average of 11 days.

In 2015, there was a single enteric outbreak reported to WDGPH in a group home. Norovirus was identified during this outbreak, which lasted a total of ten days.

The Public Health management of institutional outbreaks is becoming an increasingly challenging responsibility as LTCHs and RHs provide care to an increasing number of acute and complex residents, have difficulty retaining long-term employees and have limited human resources/time for infection control and outbreak management. Similarly, hospitals have a constant demand for beds and routinely request transfers and repatriations of patients to LTCHs and RHs in a declared outbreak. Best practice documents set out criteria for outbreak management and discourage repatriation of non line-listed (well) residents during an outbreak. The longest outbreak in 2015 lasted a total of 49 days; outbreaks of prolonged duration can have a significant negative impact on both residents and facilities requiring repatriation if these requests are not able to be approved or accommodated while the outbreak is ongoing. Public Health’s goal is to build infection control capacity in institutions while balancing the urgent bed needs of hospitals with the potential risk/benefit of the transfer to the vulnerable resident.

The goal of the Infectious Diseases Prevention and Control Standard is to prevent or reduce the burden of infectious disease of public health importance.1

Additionally, under Requirement #7 of this Standard, ‘a medical officer of health or designate (must be) available on a 24/7 basis to receive reports of and respond to (outbreaks and) infectious diseases of public health importance…’.1 To comply with this requirement, a member of the Health Protection Division along with an agency program manager or director is always on-call after hours, weekends, and holidays in order to respond to reports in a timely manner. Institutions which are required to report suspected or confirmed outbreaks include long-term care homes (LTCH), licensed daycare centres, hospitals, and other institutional settings3.

We will work with communities to support the health and well-being of everyone.

Our programs and services use health equity principles to reduce or eliminate health differences in our communities.

Two population groups can be unintentionally negatively affected by the infection control measures Public Health recommends during a respiratory or enteric outbreak: the elderly residing in facilities and children attending daycare. It is important that with each recommendation Public Health makes the quality-of-life impact for elderly residents living in a facility is considered. This becomes increasingly important for residents in facilities which have difficulty controlling and ending outbreaks. Public Health must be available to consult daily with families and facilities on scheduled social activities and balance recommendations associated with the risk of disease transmission with the impact on quality of life.