Home / Implementation of the ECA and Changes to the SFOA

Implementation of the ECA and Changes to the SFOA

(a) That the Board of Health receives this report for information. 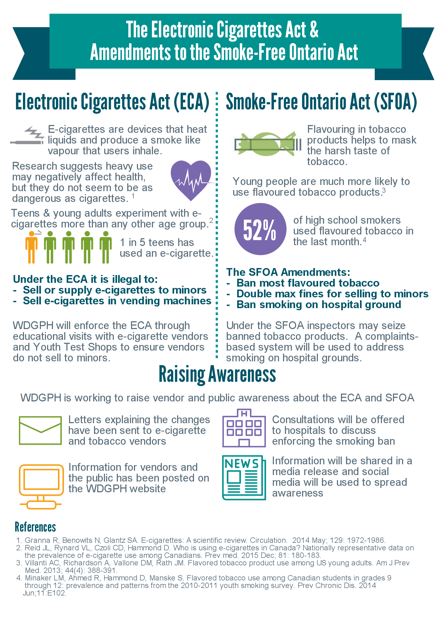 Under the ECA it is illegal to:

WDGPH will enforce the ECA through educational visits with e-cigarette vendors and Youth Test Shops to ensure vendors do not sell to minors.

Under the SFOA inspectors may seize banned tobacco products. A complaints based system will be used to address smoking on hospital grounds.

WDGPH is working to raise vendor and public awareness about the ECA and SFOA:

On January 1st, 2016, the portion of the Electronic Cigarette Act (ECA) that bans the sale of electronic cigarettes to minors came into effect. Several amendments to the Smoke-Free Ontario Act (SFOA) also came into effect, including a ban on selling most flavoured tobacco products.  This report provides information on this new legislation, enforcement activities that will be undertaken by the health unit and activities that have been undertaken to inform vendors and the general public of these changes.

On January 1st, 2016, part of the ECA and several amendments to the SFOA came into effect in Ontario. The ECA introduces legislation governing the sale of electronic cigarettes (e-cigarettes) to minors and is the first of its kind in Ontario. The amendments to the SFOA address various topics related to tobacco enforcement. A brief description of the ECA and SFOA changes are listed below:

The ECA defines electronic cigarettes as vaporizers or inhalant devices that contain a power source and heating element designed to heat liquids and produce vapour intended to be inhaled by the user directly through the mouth. This definition does not include the liquid (called e-liquid) as an electronic cigarette component. However, it is expected that future amendments to the ECA will alter the definition so that it include e-liquids.

The ECA also includes a section that bans the use of e-cigarettes in places where smoking is prohibited. Although initially scheduled to be proclaimed on January 1st, 2016, this section of the Act was delayed, pending further consultation. The delay is not expected to last longer than three months; however, a proposed proclamation date has not been released.

The Act also includes a ban on display and promotion of e-cigarettes in retail settings.  However this section of the Act is not expected to be proclaimed until January 1st, 2017.

More details regarding the SFOA amendments can be found in Appendix A.

Public health units are responsible for implementing and enforcing both the ECA and the SFOA. Wellington-Dufferin-Guelph Public Health (WDGPH) will use a progressive enforcement approach, focusing initially on education and later on enforcement.

During the first quarter of 2016, the appointed inspector under the ECA will conduct educational visits at e-cigarette retail locations. During these visits the inspector will inform vendors of their obligations under the Act and will answer any questions that arise. Required signage will be delivered during these visits and information will be given regarding the restriction on sales to minors and future pending amendments to the ECA. Charges will not be laid during the initial education visits.

During the second quarter of 2016, the ECA inspector will conduct youth access inspections with youth test shoppers. These inspections will be quite similar to tobacco youth access inspections, however, youth test shoppers will attempt to purchase an e-cigarette rather than a tobacco product. If vendors sell e-cigarettes to test shoppers or if non-compliance with ECA regulations is observed, a progressive enforcement approach will be implemented. The progressive enforcement process is described in the WDGPH Youth Access-Sales to Minors procedure for ECA enforcement, which is based on enforcement directives from the Ministry of Health and Long-Term Care.

The SFOA amendments will impact tobacco enforcement procedures in two ways.  Inspectors will now have the option to seize any tobacco products that are prohibited for sale under the SFOA. For example, if an inspector were to see flavoured chew tobacco offered for sale in a convenience store, they would have the option to seize it. Seizure authority is discretionary and inspectors will use their judgement in determining whether it is appropriate.

Secondly, a complaints-based system will be used to enforce the prohibition against smoking on hospital grounds. Although all of the hospitals in WDG have smoke-free policies, these policies are not uniformly enforced, especially among hospital employees. It is expected that inspectors will make several visits to hospitals and psychiatric facilities in order to enforce the smoking ban.

WDGPH has done the following to notify stakeholders affected by the ECA and SFOA amendments:

Educational visits and signage distribution will continue throughout the first quarter of 2016.

WDGPH is working to raise public awareness about the ECA and SFOA via the following:

Outreach activities are also planned for when the ban on using e-cigarettes in places where smoking is prohibited comes into effect. Several outreach activities will be similar to those listed above (i.e. issuing a media release, sending letters, providing consultations) but will also include using radio advertising in order to reach a larger audience.

The ECA represents an attempt to balance making a potentially effective smoking cessation product available to those who want to quit with not exposing a generation of young people to a product that has the potential to normalize smoking and lead to nicotine addiction.

The SFOA amendments are intended to make it easier for health units to provide effective tobacco enforcement. The increased maximum fines and ban on flavoured tobacco products are intended to further reduce the number of minors who initiate tobacco use.

Chronic Disease and Injury Prevention, Requirement 13. The Board of Health shall implement and enforce the Smoke-Free Ontario Act in accordance with provincial protocols, including but not limited to the compliance protocol, 2008 (or as current)” (pg. 31).

The implementation, enforcement and outreach activities for the ECA and SFOA are related to two strategic directions from the 2016-2020 Wellington-Dufferin-Guelph Strategic Plan.

We will work with communities to support the health and well-being of everyone.

We are committed to providing excellent service to anyone interacting with Public Health.

A major health equity issue related to the rise of e-cigarettes is related to use among youth.

There are concerns that several of the marketing tactics used to promote e-cigarettes may be especially effective among youth. These include celebrity endorsements, a strong social media presence and flavours such as “cotton candy”, “tutti frutti” and “alien blood”.1 Previous research in tobacco shows that youth are particularly vulnerable to these types of marketing tactics.2

Although some proponents of e-cigarettes claim that they are only used by people trying to quit smoking, there is considerable evidence that their popularity among youth is increasing dramatically. In Canada, more teens and young adults have used e-cigarettes than any other age group. One in five Canadians between 15 and 19 have used an e-cigarette. Furthermore, 55% of the youth who had used an e-cigarette had never smoked.3 In Ontario, 15% of high school students have reported using more than “just a few puffs” in the past 12 months. Of these students, more than a third used nicotine containing e-cigarettes, while an additional 20% were unsure of the nicotine content.4

This is especially concerning because adolescent brains are more sensitive to nicotine. It has been well established that nicotine has stronger rewarding effects on adolescent brains than adult brains and youth who smoke are considerably more likely to become addicted to nicotine than adult smokers.2 Therefore, considering the widespread use of e-cigarettes among teens and their increased vulnerability to nicotine addiction, e-cigarettes have the potential to foster nicotine dependence in a new generation of youth.

Appendix “A” – Changes Associated with the ECA and SFOA Amendments

2. Preventing tobacco use among youth and young adults.  A report of the surgeon general. Rockville (MD); US Department of Health and Human Services. 2012.

Details of the ECA and SFOA Changes

Implementation of ECA and Changes to SFOA (PDF, 7 pages, 3.9 MB)